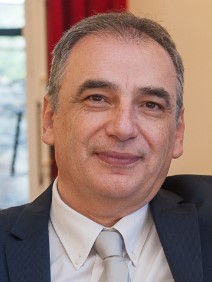 After his graduation he worked in the French company ELF AQUITAINE (S.N.Ε.Α) as "INGENIEUR", Analysis Engineering Programmer, and subsequently as a manager for the department of Information Systems Research & Development of the Group for the exploration & exploitation of Oil & Natural Gas.

Then, his career includes work for a number of years (25+years) as IT Executive of all the institutions of the American College Anatolia in one of the oldest, biggest and most complex Information Systems in Nothern Greece and at the same time support as informatics consultant in IT-specific solutions to large companies and organizations of Thessaloniki (THPA, Americal College Anatolia, Y.M.C.A., ENIMEX, TOTGAS, Elliniki Sfoliata, etc.).

In 2008 he competed in the European Program EUCog - European Network for the Advancement of Artificial Cognitive Systems, Interaction and Robotics II & ΙΙΙ as IT Manager and Coordinator in the Informatics field on behalf of American College Anatolia.

Today, as an executive manager with high  skills, multiannual experience and desire, he develops the new image of the company, applying a new administrative  model and designing a new generation of  innovative products accomplishing his  vision for the evolution of informatics.